Wireless Communication and Applications above 100 GHz

Opportunities and Challenges for 6G and Beyond

A talk presented by Ted Rappaport to the MMWAVE Coalition in the face of the First Report and Order of ET Docket 18-21, FCC Spectrum Horizons.

The FCC, in its Report and Order dated February 22, 2019, is recognizing and promoting the development of >95GHz spectrum. In its response to many requests for action, including filings by the mmWave Coalition, the FCC responded with its R&O detailing plans for Opening these mmWave+ bands will prompt development of novel communications uses, such as instantaneous high-bandwidth video transmission, as well as other non-communication uses (such as novel spectroscopy and imaging, including detection of drugs and explosives, detection of cancerous tissue, and other materials analysis and sensing.)

The R&O addresses two important uses and approaches: 1. Licensing procedures and 2. Unlicensed use. For licensed use, the Commission refers to its Spectrum Horizons Experimental Radio Licenses policy, which will consider applications for Experimental use in the 95 GHz to 3 THz bands. In this action, the FCC states that they “will not, by rule, preclude the use of any specific frequencies. By adopting this expansive approach to experimental licensing for these bands, we seek to foster an environment where innovators can develop new products…[the FCC is] hesitant to take any action that may stifle innovation.”

The full Report and Order can be found here

The mmWave Coalition submitted comments to urge the National Telecommunication and Information Administration (NTIA) to facilitate greater access to spectrum above 95 GHz for non-Federal use. At present, with minor exceptions, no licensed or unlicensed use of this spectrum is allowed under FCC rules. NTIA policies are key for access to these bands.

The Coalition strongly advocates that spectrum policy changes are essential for the international competitiveness of the United States. Outside the US, R&D efforts are underway to exploit the unique characteristics of the millimeter wave frequencies.

The spectrum above 95 GHz is very different than the lower spectrum where many basic concepts of spectrum policy were developed over the past 80 years or so. Some of these technical differences include propagation characteristics that become much more dependent on directional antennas and encourage the development of adaptive beam-forming.

Many of our foreign economic competitors are actively pursuing use of this spectrum with coordinated government supported R&D and supportive national spectrum policies.

The mmWave Coalition met with Julius Knapp, Chief of the Office of Engineering and Technology and an extended OET staff representatives. The meeting was a follow-up to an ex parté filing by the Coalition on the allocations above 95 GHz. Mike Marcus led the discussion and presented the Coalition’s position on wider, contiguous allocations. Uses for communications, spectroscopy and other applications present opportunities for use of the wide mmWave+ bands, known colloquially as “EHF,” or Extra High Frequency. The FCC, balancing other interests and incumbents, issued a Notice of Proposed Rulemaking released as Docket 18-21 in February 2018.

The presentation by Mr. Marcus featured efforts underway internationally to promote R&D of various bands above 100 GHz. The message is that the US should be leading the development of technologies and applications for very high capacity communication links, sensing and other promising uses. In addition ex parté comments were filed by the coalition.

This area continues to evolve and, as demonstrated uses emerge, the expectation is that further allocations may be expanded to capitalize on the use of these bands.

The mmWave Coalition is continuing to advocate for smart FCC rule making for frequencies between 95 and 275 GHz where there are currently allocations, but no rules.  These bands are critical to future millimeter wave technologies.

New organizations are actively being recruited by existing members in order to create a voice from cutting edge technology companies on the importance of the frequencies between 95 and 275 GHz for the next evolution of technologies beyond 5G and that leverage millimeter wave spectrum.

In 2018, the Coalition was pleased to welcome NYU Wireless and its Director, Professor Ted Rappaport.  Ted has been instrumental in advancing the millimeter wave spectrum for commercial uses.  NYU Wireless along with Dr. Rappaport holds the annual Brooklyn 5G Summit every April with many multi-national organizations attending https://brooklyn5gsummit.com and pushing this next revolution of spectrum technologies.

The major focus and accomplishment for the Coalition in 2018 was to respond to the FCC’s Spectrum Horizons Notice for Proposed Rulemaking (NPRM) and bringing the mmWave Coalition into fruition as a major voice with the FCC on millimeter wave matters.  Three documents were submitted by the Coalition to the FCC along with two follow up in person meetings.

In those documents and meetings, the Coalition’s primary focus was to advocate for at least a few non-fragmented mmWave bands on the order of 20-40 GHz wide and for a predictable rules framework for THz Spectroscopy. The Coalition now has the FCC’s and NTIA’s attention and needs to continue this important advocacy to facilitate robust services above 95 GHz.  Not only is the Coalition’s work important to achieving key policy goals, but participation in the regulatory process on this cutting edge topic also raises the profile of each member company among government and industry leaders. The Coalition’s documents filed with FCC can be found here.

The main objective of the mmWave Coalition for 2019 is to get FCC to publish a first set of rules for bands above 95GHz that is aligned with the Coalition’s goals and will provide the certainty needed to encourage more investments in these bands. In order to achieve this, we will bring forward new technical inputs that leverage the work being done by Professor Rappaport (see link) and others to help answer various key questions that FCC has issued in its NPRM.

On February 22, 2018, the Federal Communications Commission adopted a Notice of Proposed Rulemaking (NPRM) in Docket 18-21 with the title “Spectrum Horizons” dealing with the use of frequencies above 95 GHz. Since 2003, 95 GHz had been the upper limit of explicit FCC rules permitting use of spectrum with routine approvals. New products at higher frequencies have needed non routine deliberate which were usually very slow and nontransparent. 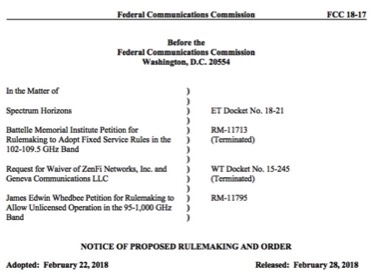 Public comments received to date by FCC in this docket are located here.

We use cookies on our website to give you the most relevant experience by remembering your preferences and repeat visits. By clicking “Accept”, you consent to the use of ALL the cookies.
Cookie settingsACCEPT
Manage consent

This website uses cookies to improve your experience while you navigate through the website. Out of these, the cookies that are categorized as necessary are stored on your browser as they are essential for the working of basic functionalities of the website. We also use third-party cookies that help us analyze and understand how you use this website. These cookies will be stored in your browser only with your consent. You also have the option to opt-out of these cookies. But opting out of some of these cookies may affect your browsing experience.
Necessary Always Enabled
Necessary cookies are absolutely essential for the website to function properly. These cookies ensure basic functionalities and security features of the website, anonymously.
Functional
Functional cookies help to perform certain functionalities like sharing the content of the website on social media platforms, collect feedbacks, and other third-party features.
Performance
Performance cookies are used to understand and analyze the key performance indexes of the website which helps in delivering a better user experience for the visitors.
Analytics
Analytical cookies are used to understand how visitors interact with the website. These cookies help provide information on metrics the number of visitors, bounce rate, traffic source, etc.
Advertisement
Advertisement cookies are used to provide visitors with relevant ads and marketing campaigns. These cookies track visitors across websites and collect information to provide customized ads.
Others
Other uncategorized cookies are those that are being analyzed and have not been classified into a category as yet.
SAVE & ACCEPT