There is widespread recognition that mmWave frequencies offer great promise for many wireless applications that will assist in enhancing U.S. infrastructure, expanding broadband services in rural areas, bringing new vertical industries to the communications network, and maintaining U.S. leadership and economic competitiveness.

Matching this recognition is a significant effort among academic, industry and government leaders to develop and test new wireless technologies and services, including efforts by the Federal Communications Commission to support 5G and 6G wireless in frequencies at the mmWave, sub-Terahertz, and Terahertz bands.

Today, extensive research and development for wireless devices above 95 GHz is underway, and there is a need for a suitable regulatory framework for their eventual use. Example areas that need to be addressed to foster commercial success and enhance the likelihood of success of investments at this spectral frontier: 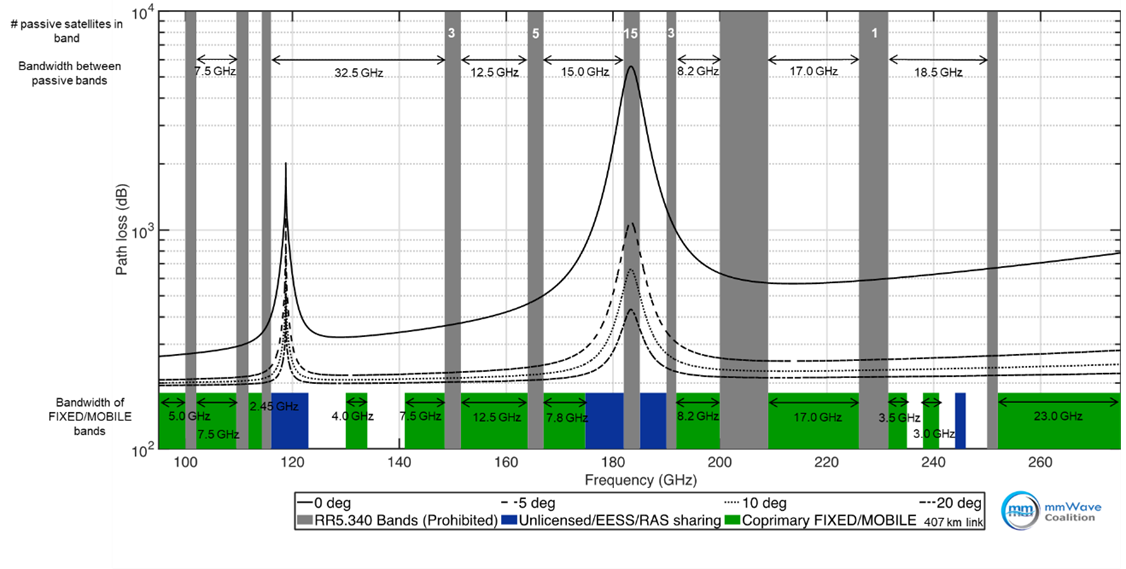 Global regulatory agencies such as Japan’s Ministry of Internal Affairs and Communications (MIC), Conference of European Postal and Telecommunications (CEPT), the Federal Communications Commission (FCC), and England’s OFCOM have adopted rulemakings and have opened up the spectrum above 100 GHz.

As shown in the image above, in March 2019, the FCC under ET Docket 18-21 opened up four new unlicensed bands (shown in blue) and UK’s Ofcom followed suit. The mmWave coalition was formed to advocate and support the development and commercialization of frequencies above 100 GHz.

So much more spectrum exists above 100 GHz. Currently RR 5.340 presently prohibits “all emissions” in several forbidden bands (shown in dark gray) to protect radio astronomy and passive satellite sensors which detect very low levels of energy and might be harmed by interference if special care was not taken to protect such passive systems. The ITU agreed in Resolution 731, at the request of the US and European countries, to study if and under what conditions sharing the ten forbidden bands may be shared. The issue of out of band emissions (OOBE) into the passive bands is also an important study area to assure that adjacent terrestrial transmissions do not leak into or interfere with satellite sensors and studies of limits on such emissions to protect nearby passive bands are beginning. The mmWave coalition is fostering a constructive and win-win approach to learning about these issues and developing technologies that will allow successful commercialization of the spectrum above 100 GHz in the coming years.

We use cookies on our website to give you the most relevant experience by remembering your preferences and repeat visits. By clicking “Accept”, you consent to the use of ALL the cookies.
Cookie settingsACCEPT
Manage consent

This website uses cookies to improve your experience while you navigate through the website. Out of these, the cookies that are categorized as necessary are stored on your browser as they are essential for the working of basic functionalities of the website. We also use third-party cookies that help us analyze and understand how you use this website. These cookies will be stored in your browser only with your consent. You also have the option to opt-out of these cookies. But opting out of some of these cookies may affect your browsing experience.
Necessary Always Enabled
Necessary cookies are absolutely essential for the website to function properly. These cookies ensure basic functionalities and security features of the website, anonymously.
Functional
Functional cookies help to perform certain functionalities like sharing the content of the website on social media platforms, collect feedbacks, and other third-party features.
Performance
Performance cookies are used to understand and analyze the key performance indexes of the website which helps in delivering a better user experience for the visitors.
Analytics
Analytical cookies are used to understand how visitors interact with the website. These cookies help provide information on metrics the number of visitors, bounce rate, traffic source, etc.
Advertisement
Advertisement cookies are used to provide visitors with relevant ads and marketing campaigns. These cookies track visitors across websites and collect information to provide customized ads.
Others
Other uncategorized cookies are those that are being analyzed and have not been classified into a category as yet.
SAVE & ACCEPT